When you go to the mountains, you see them and you admire them. In a sense, they give you a challenge, and you try to express that challenge by climbing them. – Edmund Hillary

When I was planning our El Nido trip last year, I stumbled upon an itinerary that included a trek to El Nido’s highest point. I was pretty surprised since I wasn’t expecting that there is such a thing in this quaint coastal town which is more famous for its beaches. And so I did a little more research and lol! El Nido also boasts off limestone (mountain) cliffs that line up the town and its many islands. 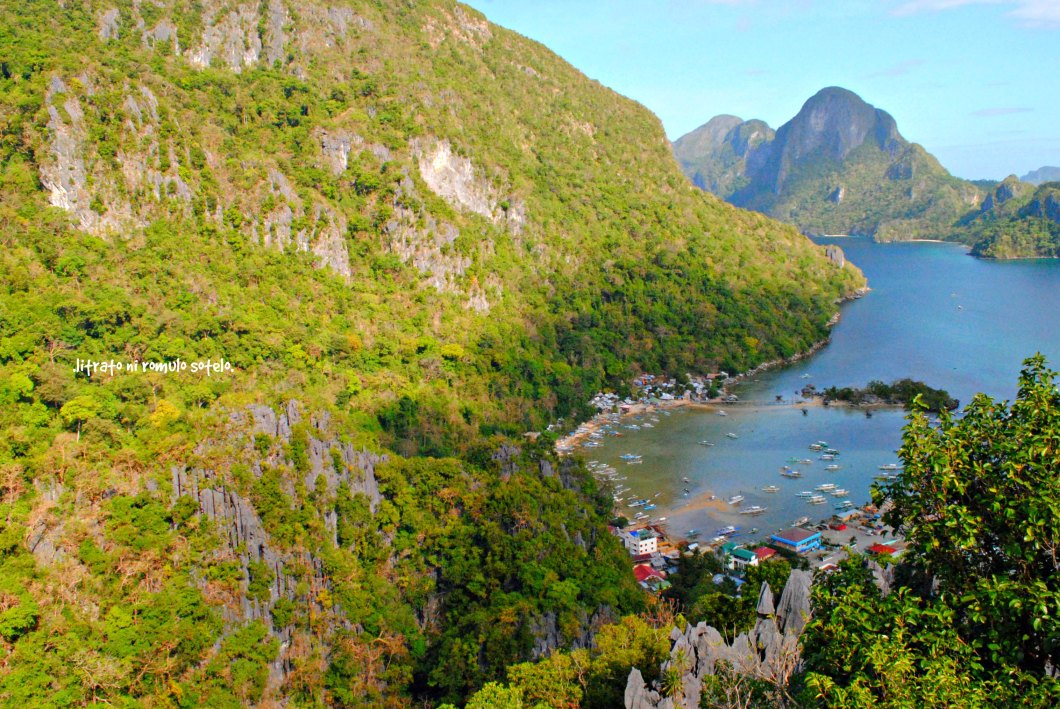 “Taraw Cliff” (or Mt. Taraw) is the highest point in El Nido, and is actually a monolith made of limestone – sharp, jagged, treacherous ones. And so, during our 3rd day in El Nido (after doing island hopping for 2-days) off we went to do some trekking because my friends and I love mountains. Most blogs described it as ‘seriously not for the faint of heart.’ True enough, the hike would welcome you a steep assault and a lot of rock climbing. Good thing our guides were very generous in helping us with what to do.

I could say that the highlights of this escapade were climbing vertical cliffs along the trail. Ninety degrees of heart-thumping, adrenaline-inducing climb! Although one may find it frightening, my friends (who are also adrenaline junkie like me) found the boulder-filled terrain to be fun-filled and exciting.

It took us around an hour to to reach the peak. And the view atop? It was surreal! It was picturesque! We were literally lost for words. And it evoked a joyful feeling sharing this spectacular view with your friends. From the summit is overlooking the azure waters of Bacuit Bay with some of El Nido’s island floating like emerald gems. We spent about an hour at the summit – it was peaceful, satisfying and made me appreciate how wonderful life is.

After almost an hour of staying at the monolith’s peak, we started our descent. The descent was faster however it remains to be quite treacherous (so one has to be as careful as during the ascend).

For those who want to squeeze in a different activity when you are in El Nido, besides the usual beachneering and island-hopping, brave your way to Taraw’s summit and feast your eyes with El Nido’s unending charm through a bird’s eyeview.

During our stay in El Nido, we did stay at the Northern Hope Inn. You may contact them at http://www.northernhopetours.com/accommodations/el-nido/northern-hope-inn/