There are three specific places I would like to see in Brazil one day. One, the gigantic Christ, The Redeemer statue; two, to trek the Amazon, and three, to have a photo shoot at its famed favela — slum in Brazil within the urban areas turned into a giant mural.

I am a sucker for anything artsy that is why I included the favela. While that dream of going to Brazil seem to be a far-fetch reality as of this moment, I am more than glad to learn that La Trinidad – Benguet’s capital and the closest municipality to Baguio, is slowly turning several communities into one humongous mural.

Passing by Benguet’s capital would mean enduring the traffic especially along Kilometer 3. I used to grudge about it since you’ll get stuck without any form of entertainment (unless you are preoccupied with your phone). Now, with the multi-hued Stonehill community just above the Balili River turned into a favela-like masterpiece, getting stuck in traffic becomes more pleasing, at least to the eyesight.

The Stonehill community is comprised of 3 sitios. These are Sitios Stonehill, Botiwtiw and Sadjao (all part of Brgy. Balili). This mural project has been called Stobosa, named after the three sitios. According to an article, I have read, there are about 180 houses in this area. With the supervision of Baguio City’s Tam-awan Art Village artists and the sponsorship from a paint company – the once dull set of houses sitting along the mountains of La Trinidad have become more delightful as they are converted into a humongous painting.
Today, La Trinidad has a new moniker because of this. Besides being known as the vegetable capital and strawberry capital of the Philippines, the town is being promoted as the “Valley of Colors.” It is worthy to mention that the residents of these sitios have actively involved themselves in this project. The project is almost into its completion. Tourists who flock Baguio, have also considered checking out the mountain of houses in various colors. 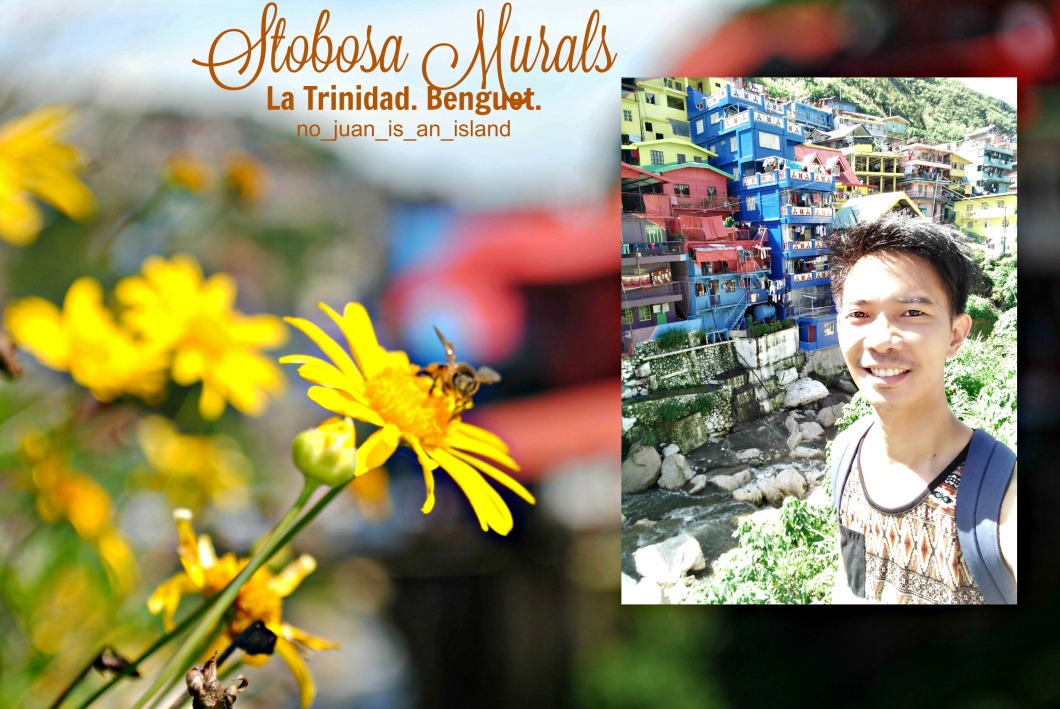 I went to see it myself one sunny day. It could be easily spotted when you are on your way to La Trinidad town proper. While I was thrilled to see it, there are also some other things that caught my attention. I like the idea of turning the houses into this big mural – yes I do. What I didn’t like are the many electrical wires hanging. I don’t know if there is a solution to this. More so, I hate that a giant tarpaulin of the paint company that donated the paint used in this project is more distinguishable than the houses themselves. It is such an eyesore! Well, they could promote their product in a way that it wouldn’t take away the beauty of the place. Lastly, I have noticed some garbages along the road fronting Stobosa (actually a turn-off). I hope the locals and tourists alike, would do their fair share of keeping the place clean.

Nonetheless, the project is a good start and such a good welcome treat when one is making his/her way to the strawberry farm, or would go to Atok and Sagada. Maybe, soon, they would also consider painting the opposite side so that the area will be bursting with so many colors.

Good job to the REV-BLOOM campaign of Department of Tourism (DOT) Cordillera which aims to promote a more sustainable tourism in my beloved CAR!
¬Don’t be a wasted soul, be “juan”derlust. Take it easy ebri”juan”.