Every day I feel is a blessing from God. And I consider it a new beginning. Yeah, everything is beautiful. – Prince

A visit to Batanes is almost incomplete without an overnight stay (or just even a quick tour) of the island town of Sabtang.

Sabtang, the smallest  and the southernmost island municipality of the Batanes island group which is composed primarily of Sabtang Island, as well as two nearby smaller and uninhabited islands: Dequey and Ivuhos. The municipality is known for its lighthouse and the old stone houses of the Ivatan villages of Chavayan and Savidug. Like Batan Island to the north, Sabtang also has a few Mission-style churches and white sand beaches.

WHAT to SEE in SABTANG:

Savidug – A barrio that is around 3 kilometers away from the town center and is abound with traditional stone houses.  It is said that there are 3 types of Ivatan houses lining the streets of Batanes: the maytuab, stone house with four-sloped thatched cogon roof; the sinadumparan, stone house with two-sloped cogon roof; and the jinjin, wood and cogon. In this village, sinadumparan houses are those that are seen. The stone walls of these houses are all identical, but the doors and windows present a way for individual ingenuity. They add color to the otherwise dull structures. You can also find St. Thomas Aquinas Chapel and the Old Beaterio (a priest’s house) in this quaint village.

Chavayan – Another seaside village famous for its rows of old stone houses, old streets, and old sites. Just like Savidug, this village’s narrow street is lined with sinadumparan stone houses. It has a tiny chapel – the Chavayan Chapel – which is a special chapel because it is the only remaining church in Batanes roofed with cogon grass. What makes it more exceptional is the fact that it is only about 10 meters away from the beach. In this town will one gets to visit the Sabtang Weavers Association. Dont forget to try out their traditional head and back woven gear called “vakul”. 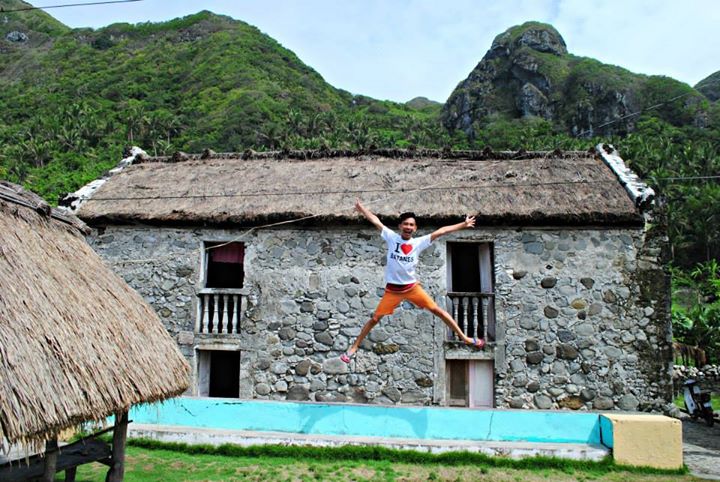 Malakdang Lighthouse or Sabtang Lighthouse – On the edge of a cliff just beside the San Vicente port, is the first man-made structure to welcome you as you move towards Sabtang .It boasts a rubble masonry finish all the way to the colonnade deck, which gives it a prevailing crude appeal. The lighthouse is best viewed from the port where rolling waves take the forefront. Just lovely!

Morong Beach –  It is also known as Nakabuang Beach. It is a short stretch beach with low, grass-carpeted hills and rocky feautures. Its most outstanding feature is an arch, called Ahaw or Mahayaw Arch, that is perhaps one of the most iconic natural landmarks in Sabtang or Batanes as a whole. There is a restaurant in the surrounding area, making it a usual lunch stop.

Chamantad-Tinyan Viewpoint – To me , this is Sabtang’s version of Marlboro Country (Racuh a Payaman). From the road going to Chavayan Village, one can already see and be in awe with this very picturesque hill. A foot trail takes visitors across rolling hills to a very charming viewing area. The rocky cliffs expanding from the slopes of the hills, create natural frames for the extraordinary landscape and seascape of Chamantad Cove beneath.

A day tour of Sabtang will give you a sense of what Batanes really is. Just what I have always imagined!

WHERE to STAY in SABTANG:

HOW TO REACH BATANES:

The fastest and safest (but could be an expensive) way to get to Batanes for now is by plane. Airline companies serving the island province with 3 flights per week from Manila are SkyJetAir, and PAL Express; while local airlines from Tuguegarao, Cagayan have a minimum number of passengers required for a flight and if there aren’t enough, the flight will be delayed / re-scheduled for 24-72 hours.

HOW TO GET TO SABTANG from BATAN ISLAND:

From Ivana Port , Sabtang is accessible via a 30-minute (or more depending on how rough the waves are) ride aboard the faluwa, the bigger traditional Ivatan boat.

You can check out the write-up on Basco, Batanes here